How Do I Look Oma?

Ryan had some fun with the Photo Booth app on my Apple.  He kills me. 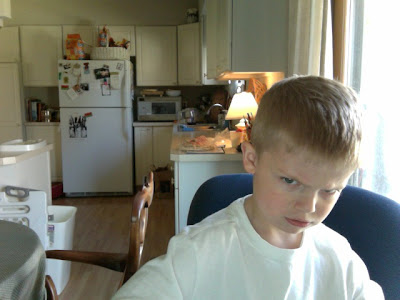 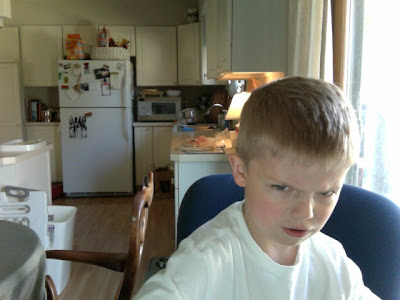 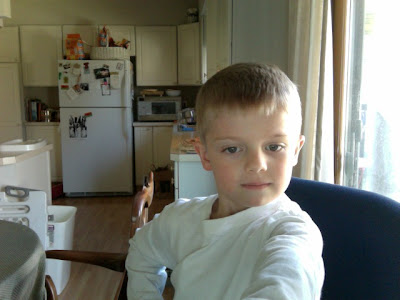 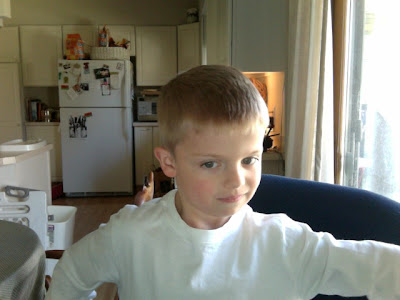 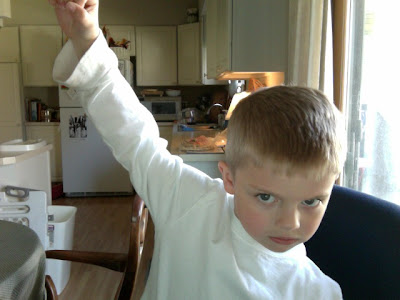 I didn't notice him doing this until after he left.
Posted by lindalou at 8:30 PM 5 comments:

Not Everything Turns Out as Planned

So I had the family over for Easter.  Decided to take the easy road and grill burgers.  That gave me all day Saturday to try out this Boston Creme Pie recipe that I found in March/April issue of Cook's Illustrated.  I love this publication (I hesitate to call it a magazine as there is no advertising).  Everything I've made from it has always turned out great.

I started early Saturday morning making the creme filling, giving it plenty of time to chill and set.  I then made the cake and after that cooled, I made the chocolate glaze.

It didn't take me too long to figure out that something wasn't right as the creme filling oozed out on all sides leaving the cake a lop-sided mess.  I didn't even bother putting on the chocolate glaze as that would have only made the mess worse. 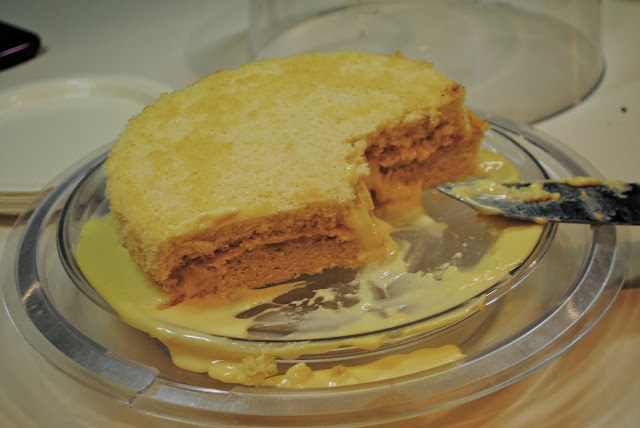 My family was very gracious and ate some of it anyway.  I just heated up the glazed and used it like a chocolate sauce. 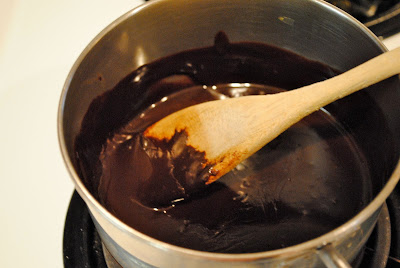 I seriously think I would have been better off making a yellow cake mix with vanilla pudding and then use the glaze...which was the only part of the recipe that turned out properly.


The Stinker was home for the week-end and I actually got a photo of him with his GMa.  (He had a good laugh watching me put the cake together.) 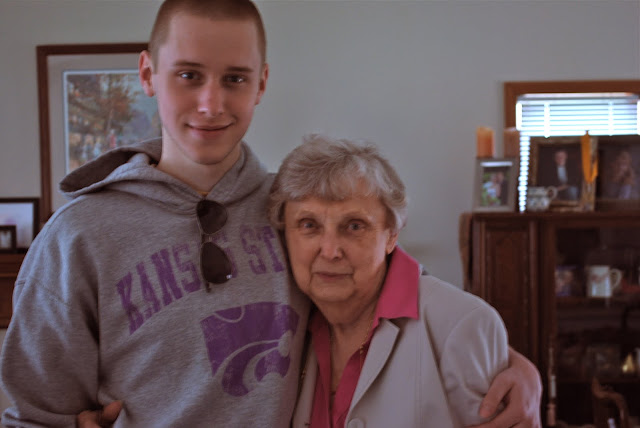 And finally...proof that Luke the wonder baby, actually does cry.  It was a surprise to me. 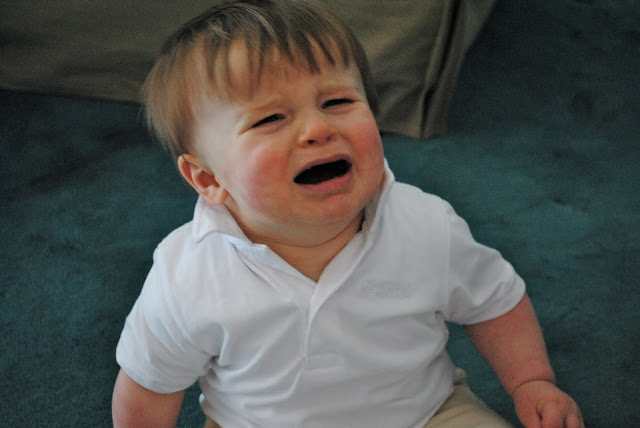 It was a great Easter, but I won't be making a Boston Creme Pie any time soon.
Posted by lindalou at 7:36 PM 4 comments: 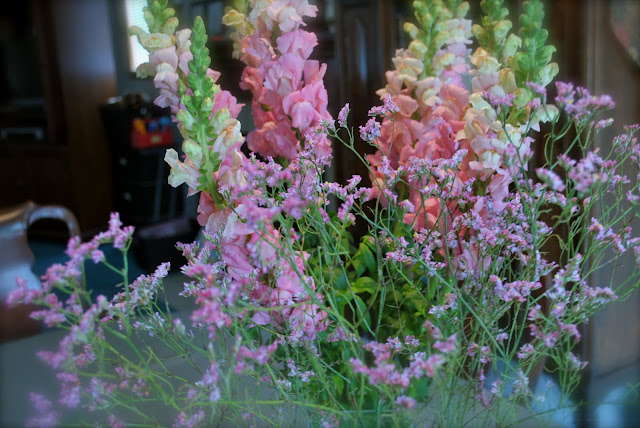 Happy Easter to my friends, family and all my blogging buddies.
Posted by lindalou at 11:20 AM 3 comments:

I was putting out my garbage yesterday evening.  As I put the black bags down, I noticed that one of them had some of the white inner gargage bag showing through a hole.  I thought an animal must have gotten into the garbage in the garage.  I bent down to check it out and there protruding from the bag was a piece of sharp metal.

As I racked my brain trying to think of what I could have thrown out that was metal, I tear open the bag further and further until I finally pull out my brand new chef's knife. 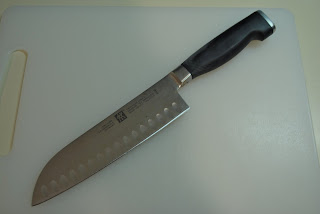 Considering I just bought this in November to replace my previous knife that I left Up North after my girl's week-end, I feel extremely lucky.  Seriously...how did that happen and why did I even bother to investigated the little hole in the bag.

I can only imagine how crazy I would driven myself trying to find it.   I would have thought I was going crazy.
Posted by lindalou at 3:35 PM 6 comments:

This movie starts out with an interesting storyline.  In the frozen wilderness, a man raises his daughter to be a well trained assassin.  He is preparing her for a mission where she must kill or be killed.  Kind of a Bourne Identity...meets 16 year old girl.

If only they had continued to develop that initial premise.  Once Hanna is dropped into civilizations, the director quickly gets caught up in artsy-fartsy camera angles and the story strays all over the place, leaving in it's wake a lot of innocent dead bystanders.  It just becomes lost and very, very sad.

The only saving grace was the young actress, Saoirse Ronan who plays Hanna.  She is quite mesmerizing and lovely on camera.

But, let's be honest, this movie just isn't worth the effort.  Save your money both now and when it come on NetFlicks.  Just don't bother with this movie.
Posted by lindalou at 7:36 PM No comments:

This is the view outside my back door. 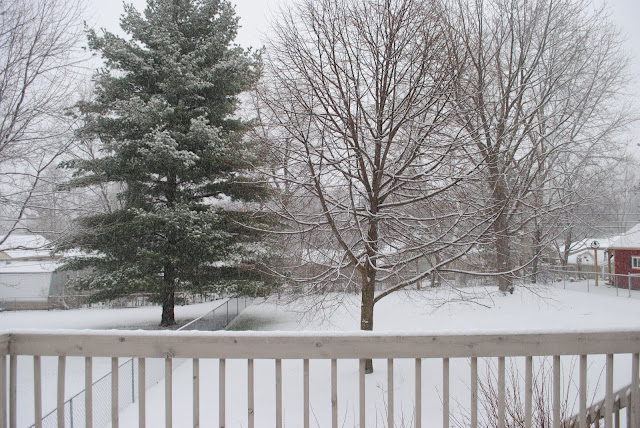 And it's still coming down.  They say it could be 2 to 4 inches by the time it's done.

Enough already.  Now I've got to go dig my boots out as I put them away for the season...silly me.
Posted by lindalou at 9:11 AM 4 comments:

We all got to celebrate Luke's first birthday last Sunday.  Not sure if he was totally into the event, but he was a good sport. 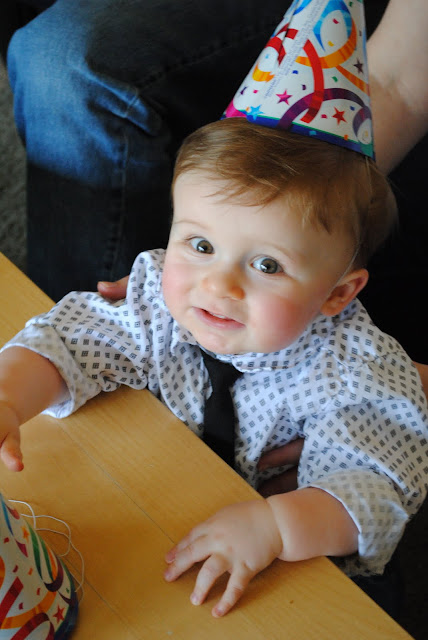 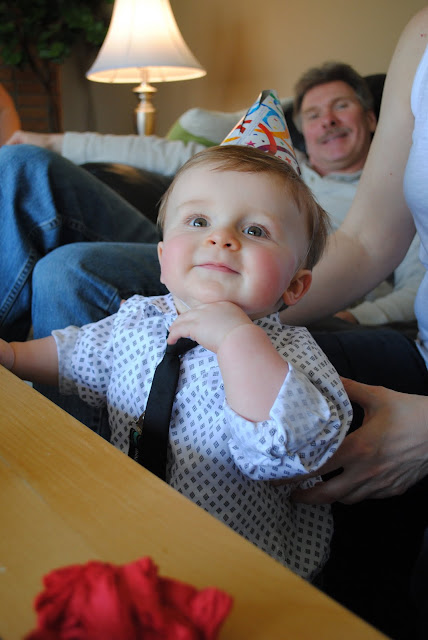 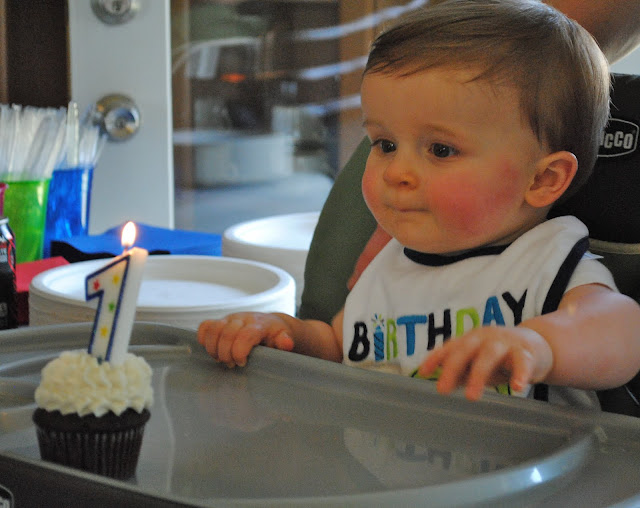 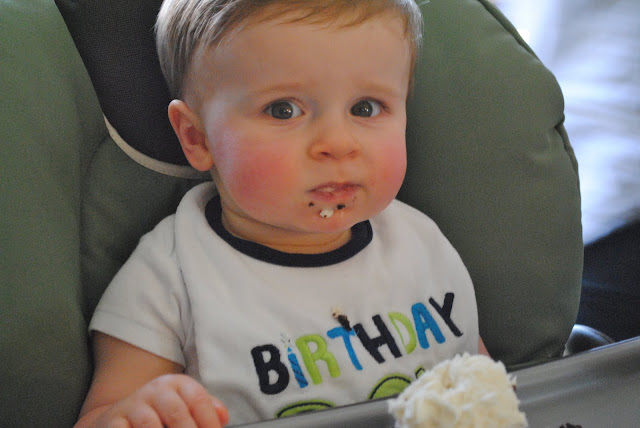 And here are the cousins together.  Trying to get all three in a photo is a real challenge. 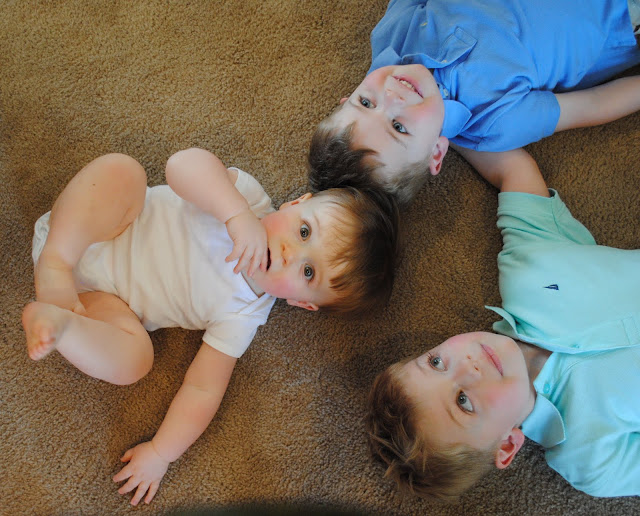 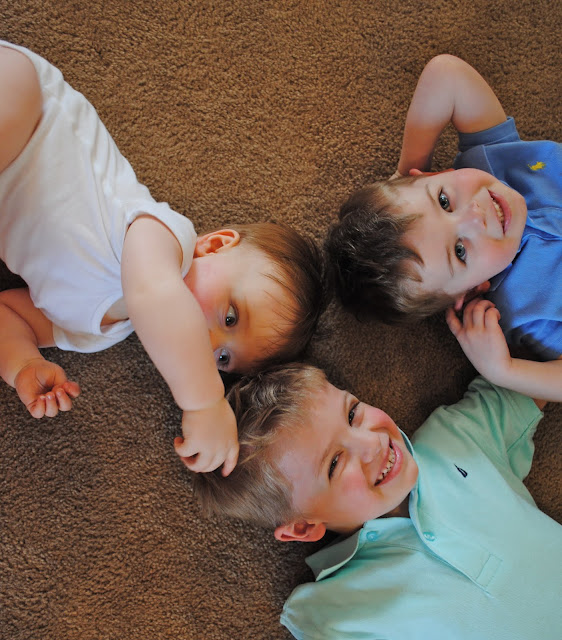 We all had a great time together and have some more birthday's coming up real soon...right Ryan and Austin??
Posted by lindalou at 3:14 PM 6 comments:

Ryan was over yesterday and while perusing the DVDs, he happened to notice the case for the Super Smash Brothers Brawl video game for our Wii system on the shelf.

"It's the Super Smash Brothers Brawl" I say.

His face lights up and his little body starts to vibrate.  See, unbeknownst to me, he has recently become extremely interested in Super Smash Brothers.

I open the case, only to find it empty...no disc.  His little eyes begin to well up and I tell him I'll text Uncle Mikey and ask him about it.  Maybe he knows where it is.

Not good, since Uncle Mikey is away at college.

As you can imagine, this makes Ryan a very unhappy boy and here's the picture we sent to Uncle Mikey to confirm our sadness: 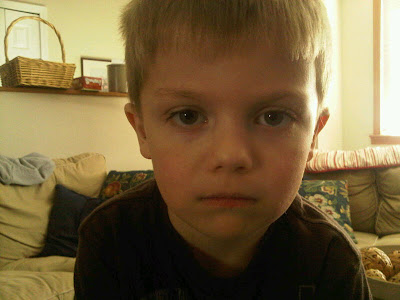 After much hemming and hawing (is that how that phrase is written), we opted for seeing Source Code on Saturday evening.  There isn't a plethora of must see movies out right now, atleast not at the "big" theaters, so we thought we would give this one a try.

Very glad we did.  A very suspenseful movie full of some interesting and challenging ideas that got us talking after the movie.

Jake Gyellenhaal plays Colter Stevens, a soldier who wakes up on a commuter train, only to find out he is in another man's body.  He soon finds out that he is part of a new mission that allows him to re-live 8 minutes of an event and his job is to try and find the bomber of the train.  I don't think I've given too much of the plot away as the movie trailers tell you this much.

The movie is very interesting and certainly action packed.  It's one of those films where it is important to pay attention to the details.  They will come in handy later.

Best part of this movie-going experience was discussing it with the two women sitting next to and the group in front of us.  Rarely do we get in a conversation about a movie with the strangers around us, but my metaphysical thinking significant other was a real boon to the other movie-goers.

If you get a chance to see this and what to discuss it, just let me know.  I'm here.
Posted by lindalou at 2:36 PM 3 comments: 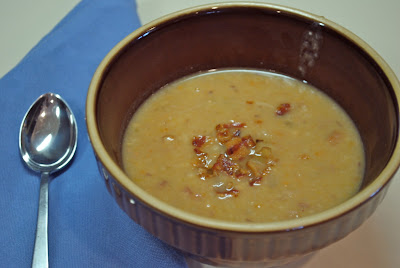 Now...let's get on with this Spring thing!
Posted by lindalou at 9:26 PM 8 comments: