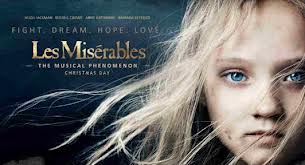 I have been eagerly anticipating this movie for months.  It is my favorite play and my favorite cry.  So, all I wanted to do on my birthday was go and see Les Mis.

I enjoyed the filmed version of the classic Victor Hugo tale, due to the performances of the actors.   Hugh Jackman was a great Jean Valjean.  Anne Hathaway was sweet and vulnerable as Fatime and Amanda Seyfried was the best Cosette I've ever seen.  I typically don't like Cosette because she comes off as non-dimensional and whiney, but Amanda gave her a depth and beauty I've never seen before.  Overall the performances were great...yes, Russell Crowe doesn't have the singing chops for Javert, but he did looked the part (although I could have done without the little blue "night cap" he wears in the first scene).

Most of the film is shot in extreme close up.  I think the director (Tom Hooper) was trying to bring an intimacy to the film that you can't necessarily get on stage, but in his effort to bring us close to the characters, he lost the sense drama and scope that the story had on stage and which should have been exemplified on screen.  How dramatic this film could have been if the camera lens had pulled out to view the larger images of despair and hope.  The scene in the tavern where the students sing "Red and Black", with most of the shots in close up, it never builds the tension of all the students singing as one unit.  Singing in unison and moving in unison.  Just a face here and a face there.

Typically, I cry throughout the whole play.  All I really need is to hear the music.  Surprisingly, I didn't cry until the end of the film.  I think the close-up technique allowed me to stay more distant and not feel what I normally feel.

In the final scene, we finally get a full screen view of the barricade with all the characters.  This was the "moviefication" that I was anticipating in the first place.  When you make a movie of a stage musical...make it bigger, not smaller.

Still so glad they made this movie and it was a perfect way to spend my birthday.
Posted by lindalou at 3:18 PM 8 comments:

Welcome to My World

Why is it that whenever I'm in a fabric store, I think all the salespeople can tell that I don't know what I'm doing.  I start out the whole process a bit intimidated and then you add the whole yards thing and I'm a mess.  Where else do you talk in "yards"??  Yards are what we all have behind our houses.

I told the woman I wanted 6 yards, but fortunately before she cut it, I realized that was way too much.  I actually only needed 2 yards, but the difference between 6 and 2 seemed like too big of an error, so I told her 3 yards instead.  Seriously...this was my logic.  Three yards sounded better than two.  And since I had two fabrics, I stood there and ordered three yards of the second material too.

I am ridiculous and in desperate need of some help. 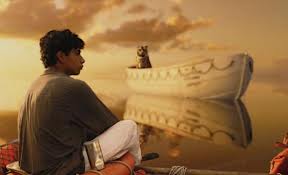 At the conclusion of this film, BW leaned over and said "I can't wait to read your review on this movie".  To which I replied, "I don't think I have the intellectual or spiritual capacity to really review this movie".

Life of Pi is a beautiful movie.  The film's story, pace and cinematography all make for a beautiful and stirring movie.  Of the film's I've seen this year, it should easily win an Oscar for Cinematography, but there is so much more to this story.  It leaves you sitting in your seat...thinking and wondering.  I like a movie that make me wonder and challenge my views of the world.  Likely you will have to find your own relationship with this film.  I finally resolved that it was a parable with a story inside.

You will find yourself gripped as Pi decipher's his way to surviving alone at sea with a fierce tiger.  Overcoming the elements, sharks, a whale, dehydration, hunger and ultimately finding a way to master the tiger so that they can both survive.

My new edition of Cook's Illustrated (January & February 2013) came the other day and I was completely intrigued by their recipe for French-Style Chicken with Stuffing or Poule au pot as it is known in France.

I decided to make it for Sunday dinner.  Here is my finished product: 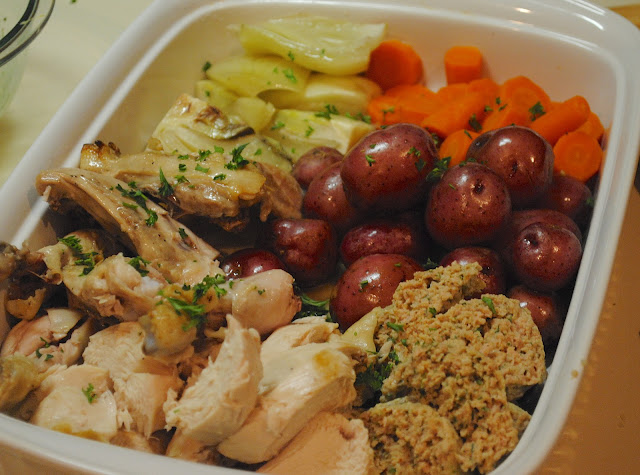 It was very good...but not necessarily "make again good".  The pork sausage stuffing was outstanding and I'm looking forward to using the leftover with some eggs this week.  As for the chicken, it was good and flavorful, but a standard roasted chicken is better.

The perks of this dinner is that after assembly, it's all in one pot and very easy to serve.  Just don't know that I'll do the whole thing again.  (Stuffing...yes!!)

Since I'm not working anymore, I should at least be making cards.  I finished this one last week.  I just started with the grey paper and went from there.  It ended up becoming a wedding card although that wasn't what I was thinking at the start. 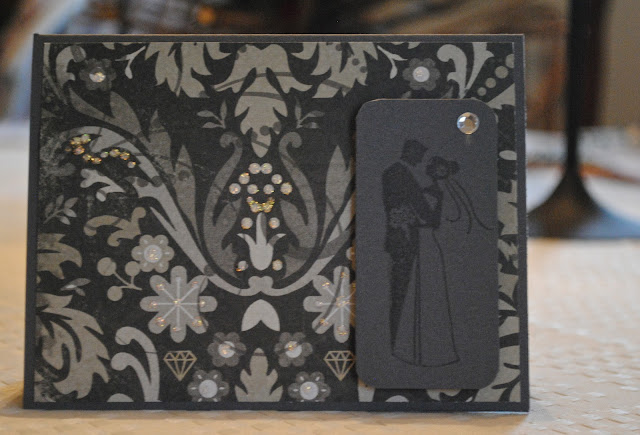 I used Stickles liquid Diamond drops to accent the design on the paper.  It actually looks better in person, as the dots look gold and don't really sparkle in the photo.

As of yesterday, I am officially unemployed.  It is a strange land and although I was laid off once before, I had a new job waiting for me that time.  This time, no shiny new job waiting around the corner.

I found out mid-October that my position was being eliminated and after the initial shock and days of balling up in the fetal position, I've had some time to adjust.

I am working on a new plan for what I'm calling Act III of my work life, but after 28 years in the satellite, distance learning and video production world, envisioning myself as anything else is taking a bit of effort.  But I am determined to move forward.

Email ThisBlogThis!Share to TwitterShare to FacebookShare to Pinterest
Labels: work

I started making my own cards, about 5 or 6 years ago.  It was just an idea I had one Valentine's Day.  I wanted to make cards for all my kids and for my honey.

It's been building ever since.  I haven't bought a card in all that time.  Although, to be honest, I have spent a little on card making supplies.

It turns out, that my wonderful Aunt Sandy, who lives in Austin...also makes her own cards.  I've decided in must be genetic or something.  My grandmother (Sandy's and my dad's mom) was quite a crafter, in addition to being a marvelous baker.

As I have reached a certain age, of which we won't discuss...I feel a connection to my dad's side of the family that cannot be explained.  Just felt, lived and breathed.

Here is the beautiful card that Sandy sent for Thanksgiving. 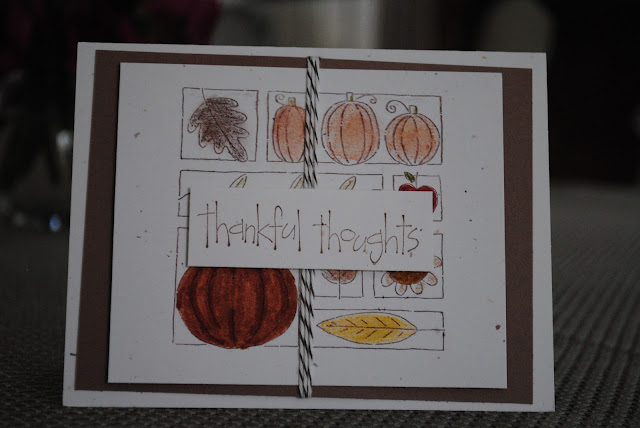 She inspires me, she's part of me.  She is family.
Posted by lindalou at 8:25 PM No comments: