I've finally gotten back to making cardmaking and I used one of my Christmas presents.  My lovely B.W. gave me a Cricut Create for Christmas.  Although, I've talked about it for years, I was completely surprised.  It never entered my mind as a gift option.

I opened it last week...just to have a look-see.  It's been sitting on my table ever since.  I think I've been a little intimidated to just dive into this.  But today, I decided to give it a whirl.

Here's what I made: 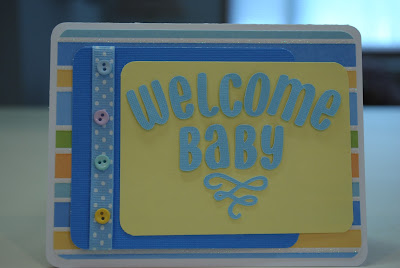 I'm very pleased with the result.  I could use a short-cut on how to adhere these little letters to the card.  Anybody got any recommendations?
(Cait and Kathy - the above photo was taken on manual mode with manual focus.  I even set the f-stop and speed.  Clearly, light helps.)
Posted by lindalou at 4:41 PM 4 comments: Links to this post 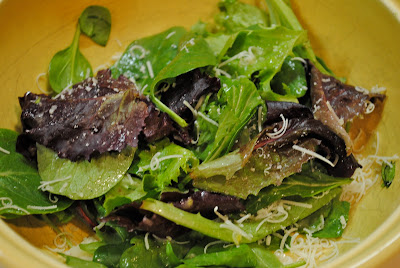 I've been making a lot of quick and easy salads lately.  I start by buying one of those containers of Spring Mix greens.  I wash and dry it in my salad spinner.  I then just grab a handful or two and toss it with a homemade lemon vinaigrette.
For the little group that frequently read my blog, you might remember I HATE anything to do with vinegar.  But did you know that a vinaigrette doesn't have to have vinegar in it.  (Thanks Ina...you're the best)
A vinaigrette is a dressing made with an oil and an acid.  The acid is frequently vinegar, but it can also be lemon.  Yeah lemon.  (So most of you probably already know this, but it was a revelation to me.)
Here's the recipe I've been using.  Super light and refreshing.
Lemon Vinaigrette
3 TBL Olive Oil
1 tsp Lemon Zest
1/4 cup Lemon Juice
1 TBL dijon mustard
salt and pepper to taste

Combine all ingredients.  (Whisk together or if you got a brand new immersion blender for Christmas...you can use that.)

I put the reminder of the greens in a tupperware container and just grab a handful to go with the next dinner.  Feel free to add some shaved parmesan or feta.  I've done both with great results.
Posted by lindalou at 7:12 PM 7 comments: Links to this post

Musings on A Cold

I have a cold.  This is my second one this winter and it has brought to mind some random thoughts.
All done.
Posted by lindalou at 10:54 AM 6 comments: Links to this post

Email ThisBlogThis!Share to TwitterShare to FacebookShare to Pinterest
Labels: lists

Once upon a time in Oregon....at the Red Hills Inn to be exact  (actually just remembered that it's the Inn at Red Hills), I had a breakfast treat called Croque Madame.  I'd never heard of it before, but it was truly the best thing I ever ate.  I have been researching and dreaming about it ever since.

One of the things I learned, was that there are actually two versions...Croque Monsieur and Croque Madame.  They are both a glorious French version of a grilled ham and cheese.  The Madame version has a beautifully fried egg on top.

Last week one night, while watching The Food Network's "The Best Thing I Ever Ate: for Brunch", chef Alex Guarnaschelli presented her favorite brunch...Croque Monsieur from the Bar Bouloud in NY.  The chef did such a great job describing how they make the sandwich, that it kind of inspired me to finally give it a try.

I started by making a simple béchamel sauce.  This recipe makes two sandwiches.  Here's what I did: 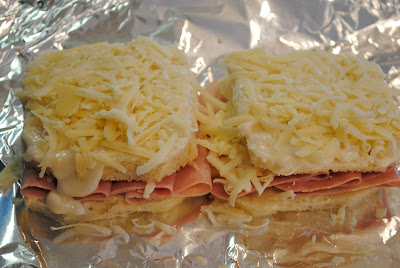 Now the restaurant in NY, makes these a day head, presses them down and refrigerates over night.  I, of course, wasn't thinking about breakfast on Saturday night, so I just made them...pressed them a bit, and then cooked them.

I baked them at 350 degrees for 20 minutes.  Then I moved them up under the broiler (Low) until lightly browned. 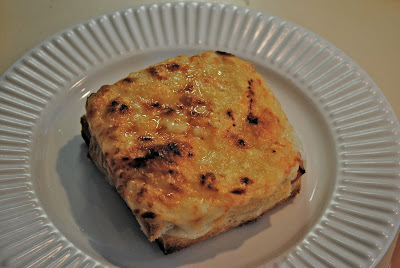 I have to say....it was delicious and I can't wait until next week-end, when I can add an egg and make Croque Madame.

So yummy!!
Posted by lindalou at 9:29 PM 4 comments: Links to this post

Not entirely sure why, but there is something about the new year that triggers efforts to get my life in order.  I figure I'm not alone here.  I'm guessing it's the fresh start thing.

It's such a huge task, so I decided to start with one little corner of my world.

This is my crafting corner a few months ago: 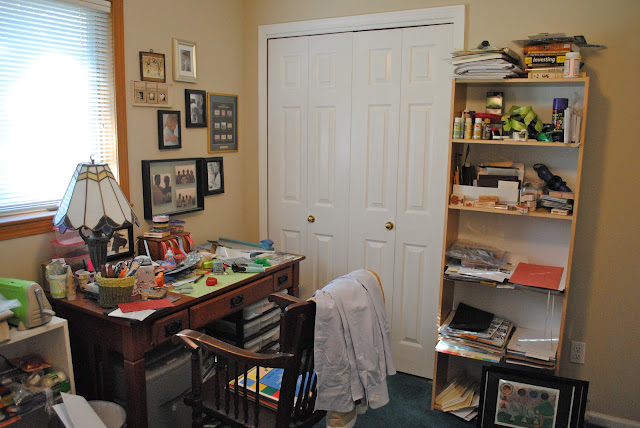 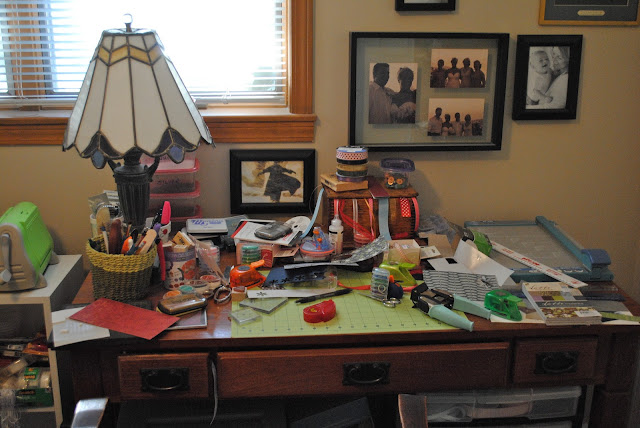 A real mess.  When it's distressed like this, I don't even want to work there.
Time to make some changes!
Here's my crafting corner today: 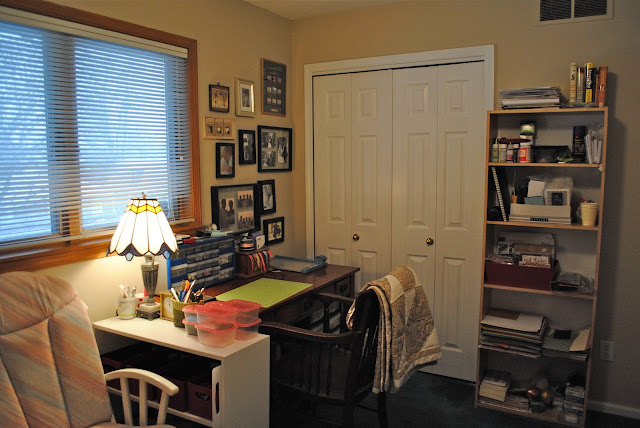 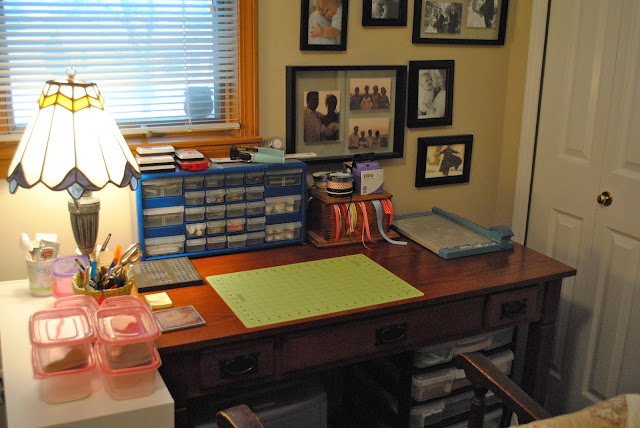 Found this little organizer at Joann's.  Works perfect for buttons, do-dads and all my ink pads. 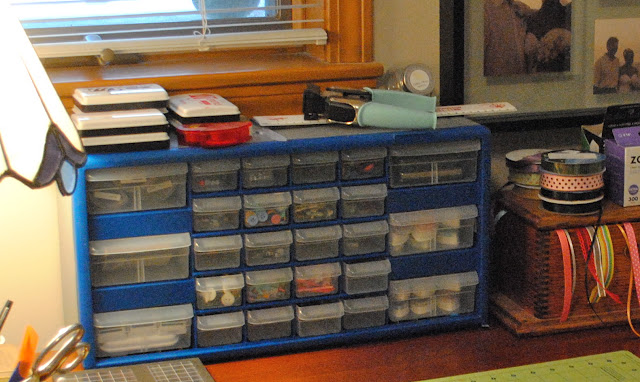 And I found these red canvas baskets at Bed, Bath and Beyonce (that's what we call it...just go with it.) 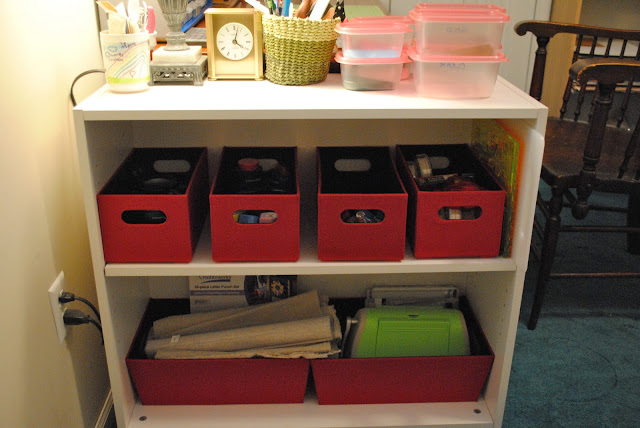 I also got a chance to hang up my final two pieces of Stinky's art work.  Now that he's in college, I doubt I'm going to get anything new.  I think Ryan's going to have to start giving Oma some of his art projects to fill up the rest of the wall. 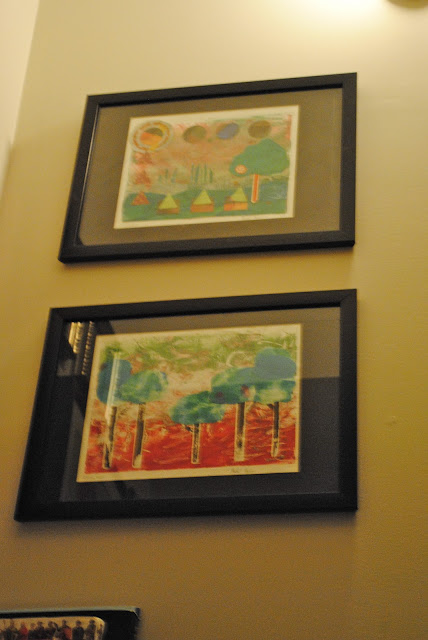 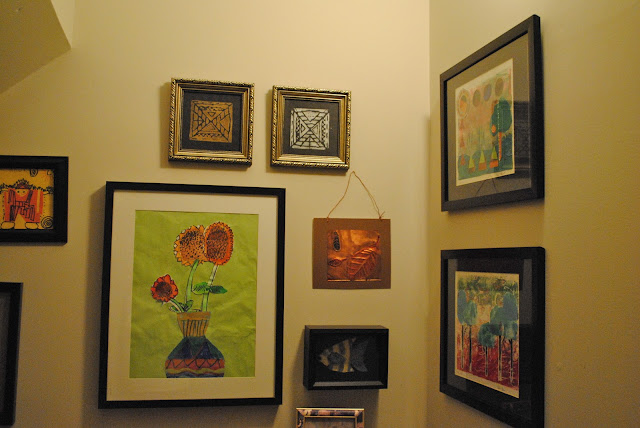 Have you organized anything lately?  Cleaned up an area in your life?  I'd love to know if January does it to you too.
Posted by lindalou at 5:31 PM 10 comments: Links to this post

I finally got the tree down today.  Still need to drag it out for pick up, but I'll do that tomorrow.  The house looks....less cluttered, in a good way.

Posted by lindalou at 9:30 PM 9 comments: Links to this post

Email ThisBlogThis!Share to TwitterShare to FacebookShare to Pinterest
Labels: lists 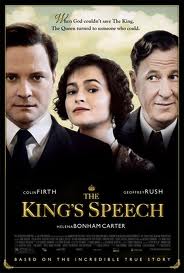 What a wonderful movie this is.  Please hurry off to see this as I'm pretty sure Colin Firth will receive a Best Actor nomination this year and if you're anything like me, you might want to have someone to root for on Oscar night.  Last year it was Jeff Bridges...this year, it's Colin Firth.  (Plus it doesn't hurt that I love Colin.)

Firth is truly amazing portraying King George VI (Elizabeth II's father) who battled a severe stuttering problem since early childhood.  Although his speech issues made fufilling many of his royal duties very challenging, as  2nd in line to the throne, he felt somewhat protected from intensity of the limelight as it would be his brother David who would be King.

Still needing to find a way to master his speech problems, with the help of his wife Elizabeth (well played by Carter), they find Lionel Logue (Rush).  Logue uses what were considered unorthodox methods to helps his clients overcome their speech impediments, which includes a level of familiarity which was quite different for a royal, including the impertinence Lionel calling him "Bertie", his family name.

When his brother David (Edward VII) abdicates in order to be with Wallis Simpson, Bertie is thrust into the role of King and with the introduction of radio and the pending start of WWII, his ability to address his subjects becomes vital for the nation.

Using close ups and depth of focus, the director cleverly draws us into the story.  Hard not to feel compassion for this man struggling to fulfill duties he never asked for or wanted.

Again..props to Firth for this role.  It must have been quite difficult for Firth to effectively portray a man with a speech impediment, when he doesn't have one.

Interesting fact:  Geoffrey Rush was one of the producers.
Posted by lindalou at 7:24 PM 5 comments: Links to this post