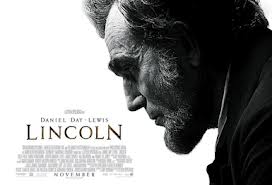 This is a remarkable movie and more importantly, a remarkable performance.  Daniel Day Lewis really becomes Abraham Lincoln with such attention to detail.  Not just looking like him, but encompassing his voice, his walk and his mindset.  All of the Oscar talk is completely deserved.

The story focuses on the passing of the 13th Amendment which outlawed slavery and servitude.  It is clear early on that Lincoln needs what appears to be an impossible 20 votes in the House of Representatives and it needs to be done before the War is over or the South will block the passage.  It really is a story about a man and a moment and his clear dedication to his vision.

It is interesting to see that the Republicans and the Democrats didn't work very well together back then than they do now.  I certainly enjoyed the across the aisle barbs thrown back and forth during the scenes set in chambers.

Great performances were also created by Tommy Lee Jones as Congressman Thaddeus Stevens and Sally Field as Mary Todd Lincoln.  From what I hear, she campaigned long and hard to get this role and she really captured Mrs. Lincoln's sharp tongue, harsh self critique with just a touch of crazy.

The movie is near 3 hours, but it did not feel that way.  It has a rhythm to it that helps reflect the rhythm of the times.  It was a period when everything took longer, something we don't have anymore.  So I appreciated the deliberate pace.

It also equally earns the PG-13 rating with a particularly graphic opening sequence in which Spielberg depicts the harsh, hand to hand gruesome reality of the Civil War.  As with many of Spielberg's films, he doesn't hold back when bringing war to the big screen.

So glad the award winning film season has started.  My movie reviews have been few and far between waiting for something that needs talking about.