I've had the boys over for the last couple evenings.  It's been wonderful having them over and I'm so glad I can help when needed. 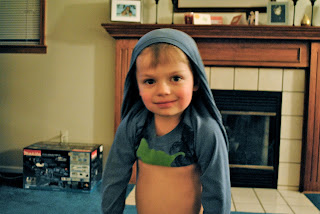 Ryan will be four in a couple of months and he is just so cool.  Mikey and he were really bonding tonight, which I don't really get to see all that much, cause as a 17 year old, Mike is rarely home let alone willing to spend time with his family.  But they were playing this game where they were trying to get the other one to look at something that wasn't there.  "Hey...look...there's a piano behind you."  It was silly and I don't know exactly how it started, but I enjoyed every minute of it.

(Uncle Rick did this shirt thing to him a couple weeks ago.) 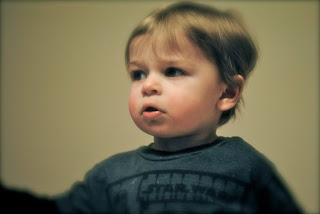 Aus....well, he's in the midst of the terrible twos so there are some wonderful moments and then....awful times of tears and whining.  But, it doesn't really change how beautiful he is.  Krissy mentioned that someone complimented her on her beautiful daughter after seeing a picture of Austin.  It's funny cause we always say that he is so pretty, that he may be the closest thing she ever gets to a girl.

(Ahhh, those eyelashes)
Posted by lindalou at 10:09 PM