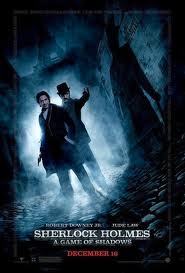 Sherlock Holmes
A Game of Shadows

Well done Mr. Ritchie, well done.  Rare does the movie sequel out do the original, but in the case of the latest Sherlock Holmes movie, that's just what happened.  This edition, in what I hope to be a long, long series of films, was terrific.  Fast paced, visually exciting with a great storyline.  I really love the dark, gritty real feel of late 19th Century London.

In "A Game of Shadows" Holmes (Robert Downey Jr.) faces off against his arch nemesis Professor Moriarity in a chess game of intrigue and political manipulation.  Again, Downey brings Holmes to life as a brilliant neurotic shuttling from scene to scene at an eclectic pace.  Several times I wanted them to rewind the film so I could see a scene again...making sure I watch more closely the next time.

Also, I am still loving a strong and capable Dr. Watson (Jude Law) who skills are further developed in this film.  Returning to the cast again is Stephen Fry as Mycroft Holmes.  He makes a great Mycroft.

I really enjoy the films use of slow motion and stop action to develop Holmes' ability to pre-plan a fight scene.  Gets even better when Moriarty gets into the act.  And I just loved their verbal dual while playing a chess game completely in their heads.

Take a break from all your holiday planning and run out to the theater to see this movie.