I'm becoming a big believer in Sunday Dinners.  Last week was a delicious Pot Roast (more on that later) and I decided to make apple pie too.  I didn't want to make a whole pie as that would be too much tempting goodies around for the rest of the week, so I made two small apple pies...using a quick method I just kind of figured out as I went along.

I started with the two Corning-ware 16 oz bowls in their oven safe bakeware.  To make things even easier, I used at Pillsbury pre-made pie crust.  I rolled out it to make it a bit larger (by the way...always do this before using, it fixes the rolled up crusts odd shape where the one end is all curly).  I then cut it in half both ways to make four quarter circles. I placed two quarters in each dish with the pointed ends overlapping and letting the extra hang over the side.

Now it's apple time.  For the sizes dishes I used, I peeled cut and cored 5 apples.  I sliced these into a pot and added 1/4 cup brown sugar and 1 tsp cinnamon.  I stirred this up and cooked it on the stove top (medium heat) until the apples were saucy and tender (about 20 minutes).

To thicken the sauce, I put 1 tsp of corn starch into a bowl and added a few spoonfuls of the juice from the pan.  I stirred that up and added it back into the pan stirring until well distributed.  The sauce thickened very quickly.  I removed it from the heat and added 2 tablespoons of lemon juice, stirring throughly.

I must warn you...my oven is acting up (service coming today), so your pies my brown up faster than mine.  Start at 30 minutes or so and then keep an eye on it.

Here is the finished product.  It was perfect and tasted exactly like apple pie. Which honestly surprised me.  Serve ala mode and enjoy. 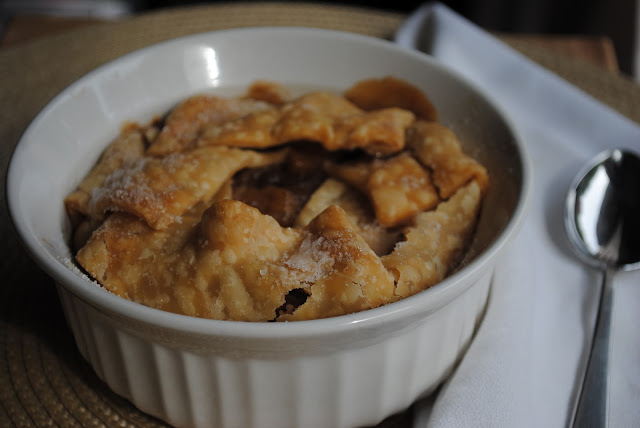