If you had ham for Easter dinner, what did you do with the ham bone?

I made mine into pea soup. 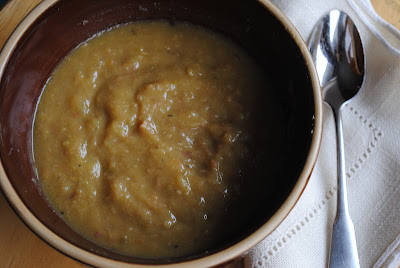 Half the audience just groaned, I know.  Pea soup is one of those things that you either love it  or hate it.  There is no middle ground here.  As you probably guessed, I'm in the love it category, as is my mom, Caitlin, BW and now Rick.

Here's how I made it:

Put the ham bone in a large soup pot and add chicken broth and 64 ounces of water.  Add the carrot, celery, onion wedge and bay leaf.  Cover and bring to a boil over medium high heat.  Reduce heat to simmer and let cook for two hours.

After two hours, remove ham bone and let it cool.  Strain broth to remove everything but the broth.  Discard all the bits and veggies that were left.

Return the broth to the soup pan and cook on medium heat.  Add the dried peas and thyme. Cook for 45 minutes until peas are tender, but still formed.

In a separate pan, saute the carrots, celery and onion in the olive oil until tender (about 5 minutes).  Add the garlic and 2 Tbl butter.  Continue to sauté on low heat until nicely browned.  (15 mintues).

Add the carrot mixture and potatoes to the broth.  Cook for 20 minutes until potatoes are soft.

When the ham bone is cool enough to handle, pull off and chop up ham.  Add back into soup.  Season with pepper.

The soup is done.  If you would like, you can use an immersion blender to blend the soup into a smooth mixture which is what I did.

This is one of those soups that is actually better the next day.