A Fish Tale, Part One 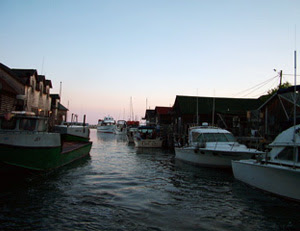 I may or may not have mentioned that I am not the world's most outdoorsy girl. In fact, gardening is about as outdoorsy as I get. Imagine my utter excitement when told..."we are all going fishing on Monday".

Here's what happened, BW and his brother got talking about how it would be good to take the boys out on the lake fishing. Seemed like a good idea...teenage boys should get out fishing. So, naturally I supported this idea. Well, I guess they mistook my support for much more as now we all "get" to go.
Being the mature person that I am, I spent the next 2 days whining about not wanting to go. One...I didn't want to get up at 5:30am on my VACATION and two...I get motion sickness in a car if I'm not careful. But after a stern talking to from my significant other, I decided to try and make the best of it and just shut up.
After a restless night, got up early and headed to the docks to meet Captain John. It was odd as all six of us headed out. I found myself identifying with the two surly teens. They weren't very excited about this outing either.
After some prep, we finally loaded up on the Infinity to head out to Lake Michigan. Ya gotta love the smell of diesel in the morning. I sat wrapped up in all the warm clothing I brought up with me. Not expecting this expedition, I was hardly prepared and it's way cold out there on the lake.
Once we got in position, the first mate was very busy setting up all the fishing lines. I think he had 9 going at once. Basically, fishing like this consists of sitting around waiting for the 1st mate to hook a fish and then you reel it in. I don't know if I truly consider it "fishing", but heck...what do I know.
The first couple hours weren't too bad. I keep focusing on the shoreline as much as I could and I managed to reel in 2 fish. At some point, Captain John decided to change our fishing location and things went downhill very quickly. This new location put us right in the middle of these rocking and rolling swells. Just writing about it brings back all the queasy feelings.
How do you know Linda isn't feeling well? First clue, she is very quiet and since this is far from my normal state, I think everyone knew I was struggling. After about an hour or so of this, I pleaded with BW, "don't we have enough fish". Then the gods and Captain John had mercy on me and we wrapped up our little expedition. I'm happy to say I didn't hurl and we managed to bring in 10 Lake Trout.
You will notice the distinct lack of pictures from this adventure. Well, I didn't think it would be a good idea to bring my camera as I wanted to have both hands available to hold on with. Mary did have her camera and she took many photos that validate that I was really there, but she hasn't sent them to me yet. As soon as I get some, I promise I will post in all my greenish glory.
Here's the only good thing about fishing on Lake Michigan...THE FISH. Oh my goodness, they were delicious. There is a small fishery business right on the dock in Leland. The boys took them in to get filleted. That evening we cooked up four of the fillets. Just for variety, we used 4 different methods or sauces.
All were delicious and almost made up for the fact that I spent the rest of the day swaying. And I still have 5 fillets in my freezer, so we've got a couple more wonderful dinners ahead of us. Yum.
Posted by lindalou at 1:47 PM