Flashback...to the Days of Decoupage

I just bought this:

And what's interesting about this is that my Dad....when he was probably about the age I am now, decided he wanted to be an "Artesian in Wood".  Now he meant Artisan...but after having 1000 cards printed up with Artesian on them...there was no going back.

He got into refinishing furniture, but mostly he made wood candlesticks.  Give him a chunk of tree and out would come a candlestick.  I remember the year he paid my brother 10 cents for every Christmas tree he dragged home. (Yes...Jeff was occasionally a bit of sucker.  I think he ended up earning a dollar.)

I actually am lucky enough to have a few of his candlesticks.  Here's my collection: 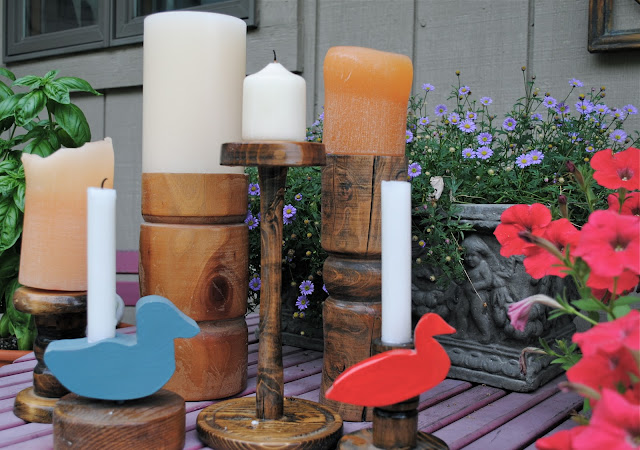 As an additional creative output, he also started to do his own version of decoupage.  (For all you youngin's that was real big back in the 70's.)  Basically, he would stain and varnish pieces of wood.  Then he would soak labels of any jar that passed through the house.  Smucker's jelly was a particular favorite.  Using his giant bottle of his favorite Mod Podge (see, I finally got around to the Mod Podge) he would glue the label onto his homemade wood frame cover it with a few coats of MP and whalla...Art.

Needless to say, his teenage children were pretty merciless about his creative genius.  To his great credit, whenever we would start teasing...he would sit and chuckle quietly (I can still see his belly shaking).

And the enormous irony, is that I have a project in mind that requires...MOD PODGE.

I only wish he had enough of his faculties so that I could share this with him.  I'm sure his belly would shake a little bit.
Posted by lindalou at 7:04 PM