One of Our Favorite Green Bean Recipes

I mentioned in a post last week about our efforts to add more vegetables into our diet. Being of limited imagination and wanting to expand beyond adding a can of mushroom soup to green beans, we found the following recipe. I'd love to be one of those people that can make this stuff up as they go along...but that's not me. I love and rely upon great cookbooks So here's a veggie recipe we love. 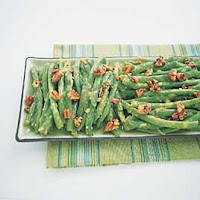 1. Toast the pecans in a 12-inch nonstick skillet over medium-high heat, stirring occasionally, until fragrant, about 3 minutes. (Careful not to burn them.) Reduce stove to medium and off heat, stir in 1 tablespoon butter, maple syrup and 1/8 teaspoon salt. Return skillet to heat and cook, stirring constantly, until nuts are dry and glossy, about 45 seconds; transfer to plate.
2. Wipe out the skillet. Heat the remaining 2 tablespoons butter in the skillet over medium heat; until foaming subsides, add the shallots, orange zest, cayenne pepper and cook, stirring occasionally, until the shallots are softened, about 2 minutes. Stir in flour until combined, and then toss in the green beans. Add the chicken broth, orange juice and sage. Stir well. Increase heat to medium-high, cover and cook until the beans are partly tender but still crisp at the center, about 4 minutes. Uncover and cook, stirring occasionally, until the beans are tender and the sauce has thickened slightly, about 4 minutes. Off heat, adjust seasoning with salt and pepper to taste. Transfer to serving dish and sprinkle with pecans
(I don’t use all the pecans in this recipe. That’s a lot of pecans, but I do make the full ¾ cup because I love having extras around. I put the extra in a small storage dish, seal and store in the refrigerator. I then sprinkle them on the next salad I make. Delish!)
Posted by lindalou at 3:56 PM